Air Force Coins – The First One is the Most Important 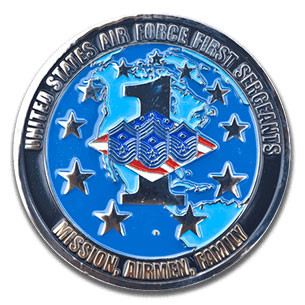 Air Force coins are sought-after mementos of a U.S. Air Force career. For many, the most meaningful coin they will receive during their Air Force enlistment is the first one they receive.

The Airman’s Coin is presented to recruits who successfully complete Air Force Basic Military Training. [Note – “Airman” is a specific rank, and the term applies to both men and women.] Presented at its own ceremony at the end of 8.5 weeks of grueling training, the Airman’s Coin is an important milestone. Receiving it marks the transition from trainee to Airman. It’s a distinction that’s hard-won.

The official Airman’s Coin features the United States Air Force Symbol – a stylized pair of wings with a star in the center and three diamonds beneath — in dark blue on the front. Encircling the image are the words “Awarded on the occasion of becoming an Airman in the world’s best Air Force.” The reverse features a similar star with wings and a red center dot, known as a “Hap Arnold star.” The design is encircled by the Air Force Core Values, which are represented by the three diamonds on the front:  “Integrity First, Service Before Self, Excellence In All We Do.”

From the moment they arrive at Lackland Air Force Base in San Antonio, Texas, USAF trainees start a rigorous process to develop discipline, teamwork, and leadership skills. Known as BMT (Basic Military Training), this period requires intense physical and mental exertion to learn the required duties. It’s no wonder that trainees often regard this phase of their Air Force term as the most challenging, and in many cases, most rewarding.

BMT comprises an increasing series of exercises and experienced design to create unit camaraderie, build physical fitness quickly, and teach decision-making and survival skills. It’s an essential element of the making of Airmen, and one for which Air Force coins are an ideal way to commemorate.

The week considered the most difficult is the sixth week of training, known as “BEAST Week.” The word is an acronym for Basic Expeditionary Airman Skills Training.” It’s a simulated combat deployment fully run by the trainees. They are responsible for defending their position from simulated air, ground and even suicide bomber attacks.

The simulated combat conditions include attacks at any time of day or night, full body armor at all times, and simulated chemical/biological warfare attacks that require gas masks and protective gear. All meals are the standard-issue MREs (Meals, Ready to Eat). The trainees learn how to handle just about any combat situation, including detection and avoidance of improvised explosive devices.

At the end of BMT, during Graduation Week, the trainees are each presented with their Airman’s Coin at an official Airman’s Coin Ceremony. Friends and family members are invited to attend, and many do. When they receive the coin, recipients know they are no longer trainees, and have earned the right to call themselves Airmen.

While an Airman’s term of enlistment will contain many more milestones, and likely will include more custom Air Force coins in the future, few things can match the satisfaction of knowing they successfully completed BMT, making the transition from civilian to a valued member of the U.S. Air Force.