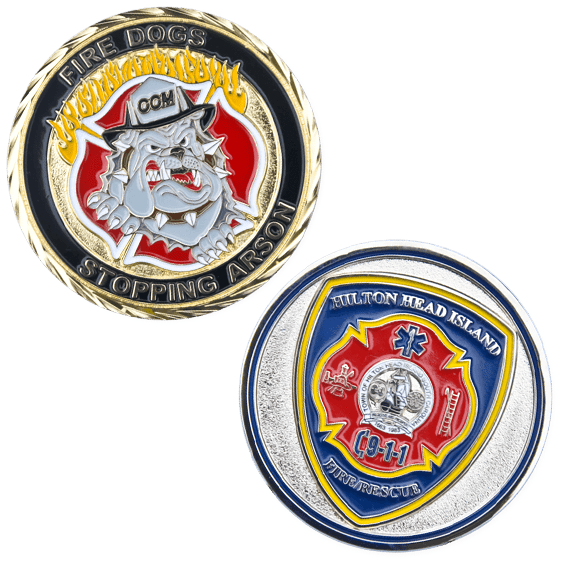 Firefighters are arguably our most heroic of first responders and well-deserving of special challenge coins for their feats of bravery and acts of public service. Our firefighter challenge coins are carefully crafted with years of industry expertise to honor the courage of one of our nation’s most selfless professions. Have a pre-existing design you’d like recreated or revamped? No problem! Ready to mint a new coin for the opening of a new station or shift? We can help!

The History of Firefighting

The long and noble history of firefighting can be traced all the way back to ancient Egypt, where citizens used water pumps to extinguish blazing fires. However, the first organized fire brigades were formed by Crassus in third-century Rome, though they weren’t the upstanding heroes we know today. Roman brigades would respond to fires as a means to extort owners out of their property by letting buildings burn if they did not agree to sell their homes to Crassus for pennies on the dollar. Luckily, firefighters were later institutionalized in a much more ethical manner by Emperor Nero through the formation of the Vigiles. The Vigiles patrolled the streets of Rome as a kind of joint fire and police force, forming up to the nearest water source and passing buckets hand over hand to combat blazes in times of emergency.

Firefighting remained rudimentary for a long time following the formation of the Vigiles. However, catastrophic fires in Europe throughout the 17th century made all Western governments re-examine the limited capacity of firefighters. The Great Fire of London in 1666 destroyed two square miles of the city, leaving thousands homeless and the economy in the gutter. Shortly after 1673, Dutch inventor Jan Van der Heyden developed the first fire hose, paving the way for the modernization of the profession and spawning the first official fire companies.

What is a firefighter challenge coin?

A firefighting coin, like the classic military-style coin, is a token of appreciation given to firefighters. They are created using the insignia and iconography specific to their field, such as the Maltese cross, hooks, ladders, helmets, bugles, etc. While these traditional symbols are common amongst custom fire coins, more and more fire chiefs opt to think outside the box. Custom-shaped coins cut to the curves of the Maltese cross are a hot commodity (no pun intended), along with designs depicting a specific shift’s chosen mascot or motto. Many are also minting coins for each fire engine at the firehouse, using a common motif throughout but playing with color variants or other options to differentiate the coins from one another.

How do I make custom firefighter challenge coins?

It’s easy! Reach out for a free quote and art proof today, and our seasoned staff will walk you through the process step by step, from initial design to finished product. Our team is dedicated to providing you with the care, service, and quality you’d expect from industry leaders. We won’t let you get burned! Get started now and enjoy the cool comfort of having your brand new challenge coins in hand in just a few short weeks!

You won't get burned with us! Get your free no obligation quote today.