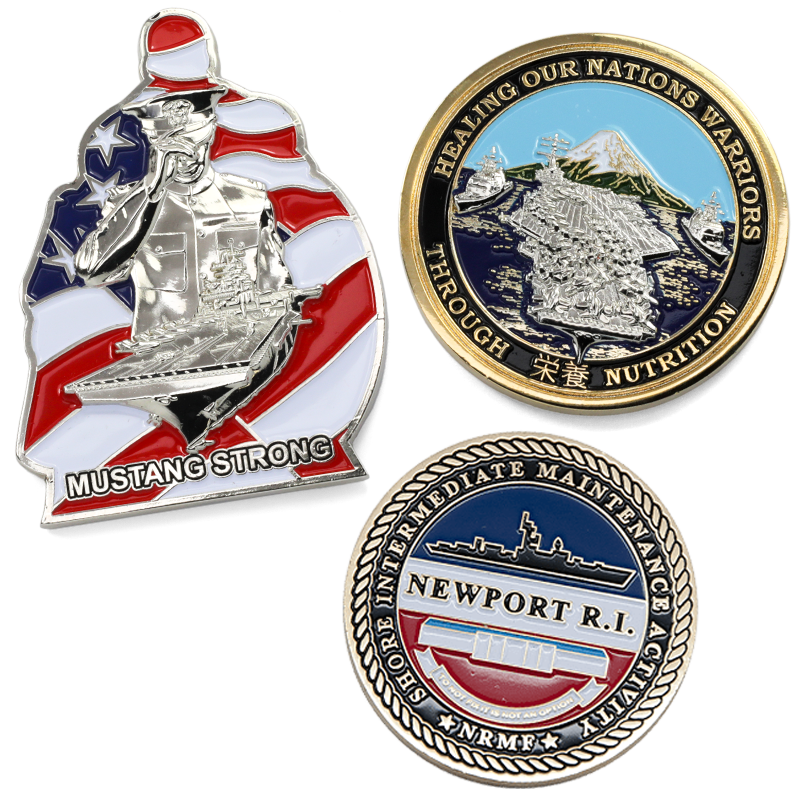 When it comes to custom military coins, ChallengeCoins4Less.com is your Number One, no-problem source We have had the honor of supplying Navy coins to U.S. sailors throughout the service for nearly 20 years. Do you want to recreate an existing one that’s a tradition for your ship? Or craft something new to honor a first or last deployment or commemorate any other aspect of life on board? Whatever style of Navy coin you need, you can count on us.

What makes Navy coins different from other challenge coins?

The insignia, of course! You can customize your Navy coins with any image you want. Even though military challenge coins are believed to have originated with the Army Air Corps, they’re not limited to any one branch. We’ve had the privilege of providing custom coins for every branch of the U.S. Armed Forces, and our Navy coins are second to none.

In 2012, we had the honor of producing the official coin for the USS Enterprise’s (CVN-65) final deployment before the great ship’s decommissioning. The coin included a 3-D replica of the ship. The front side also included the ship’s official insignia, and the reverse featured 3-D images of all eight ships to bear the name Enterprise. It’s one of the coins we’re most proud of.

Where did Navy challenge coins originate?

The origins of military challenge coins are murky, and impossible to confirm. One popular story says they began in World War I when an Army Air Corps lieutenant had custom coins made for his squad. From there, the coins eventually spread to other branches of the Armed Forces. Today, every branch has their own custom coins.

From the crew chief to the Commander in Chief, each custom challenge coin they give is unique to them. For the recipient, it signifies achievement in a vital role. Challenge coins support morale and camaraderie among the ranks, and provide keepsakes sailors can hold onto as a memento in their time of serving their nation.

Is it difficult to order Navy challenge coins?

Not at all! We make ordering fast and easy. Just fill out our no-obligation free quote form and we’ll produce a free digital proof of your coin design.

We can reproduce your existing Navy coin design, or help you create an entirely new one. We’ll work with you to ensure your design is exactly what you want before production begins. Once you place your order, we’ll produce and ship your coins, typically within two to three weeks.

If you’re ready to order custom Navy challenge coins, we’re all set. Just fill out the free quote form, or if you prefer, call or email us today. The sooner you contact us, the sooner we’ll have your custom coins in your hands and ready for your next deployment!

Ready to stay the course? Get your free no obligation quote today.