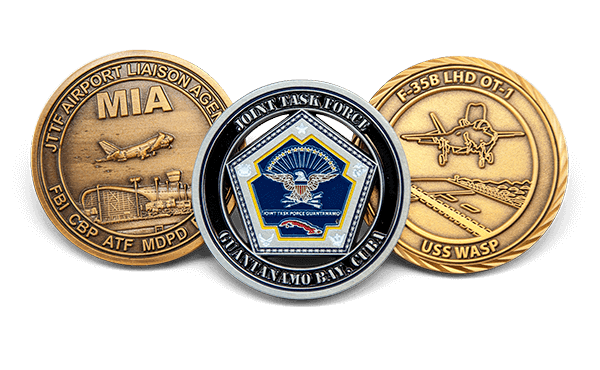 Custom challenge coins have long been a part of life in all branches of the United States military. Legend has it they date back more than 100 years, to the Army Air Service in World War I. They’ve persisted as a treasured part of military life ever since.

The apocryphal origin story has it that a wealthy lieutenant had custom coins struck for all the members of his squad. One member was later shot down and captured behind enemy lines. But the intrepid airman escaped and made his way to French-occupied territory.

There, he still faced mortal danger. Having been stripped of his identification by his captors, and unable to speak French, he was considered a German spy. As the French troops prepared to execute him, he was able to produce the coin. Once they realized he was an ally, the French troops returned him safely to his squad.

Thus, the legend began. Military coins became icons of Army service, and later of other branches of the U.S. military. With substantial lore behind them, they’re more popular today than ever.

From the Pentagon to the newest recruit, custom challenge coins are a beloved part of Army life. With a number of specific traditions behind them, coins are a well-established aspect of military lore.

Tradition holds that those who possess a challenge coin must keep it within one and a half steps of their reach at all times, no exceptions. When held to the strictest requirements, that includes while showering. If you’re more than a step and a half from your coin, you lose – and you’re buying the next round at the bar.

A challenger can issue a challenge to other members of the group to show their coins at any time. He or she who is unable to produce a coin when challenged to do so buys the next round of drinks.

Military coins are typically designed for specific units, squads, teams or missions. Whether in Germany, Korea, Vietnam, Iraq, Afghanistan or anywhere else in the world, they often increase unit cohesiveness and camaraderie. They’re a means to bond with fellow soldiers.

From their Army origins, challenge coins have spread to all branches of the U.S. Armed Forces. Public safety agencies such as fire and police departments and emergency medical services have created their own tradition of custom coins as well.

In fact, military coins have become such an established part of pop culture that they’re now frequently shown on television and in movies as well. Private organizations, including clubs and businesses, have introduced their own custom challenge coins too.

The humble coins have come a long way from their origins 100 years ago. From World War I to the present, they hold an honored place in military tradition. Modern coins are a valued part of civilian life as well.