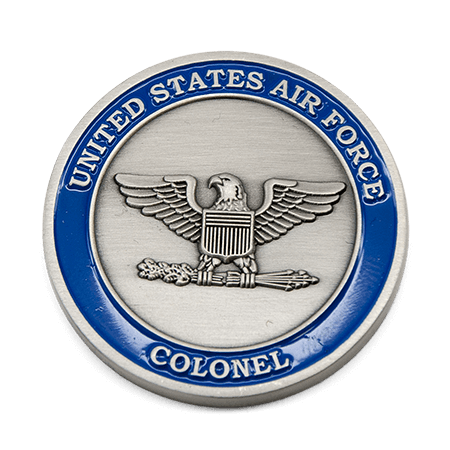 Custom military challenge coins have long been a part of military life. Up until the past few years however, they’ve been relatively unknown in the civilian world. That’s rapidly changing, due in part to mentions of challenge coins in popular media.

From television dramas to movies, novels, and even news programs, challenge coins have become visible in several media within the past 10 years or so. It all leads to greater public, and in some cases even military, awareness of the benefits and popularity of custom coins.

NBC Nightly News expanded the popularity of challenge coins with a report on them in 2009. The report even showed the handshake delivery of challenge coins. At the end of the report, correspondent Roger O’Neil showed his NBC coin, and then-anchor Brian Williams showed a full collection.

Author James Rollins used a challenge coin as a device to identify a dead character in his 2002 novel, “Amazonia.” The most common examples of custom military challenge coins, however, have occurred on television.

Not surprisingly, the shows that feature challenge coins are typically military-themed dramas. One of the first among them was NBC’s “E-Ring,” which debuted in September 2005.

The show focused on the Pentagon, hence the title. The Pentagon’s five concentric rings are labeled A through E, with the outermost being E-Ring, the one occupied by the top military leaders of the country. In one episode, a general calls for a “coin check” of a rival. When she is unable to produce a challenge coin, he uses it to imply she’s not qualified for a senior position.

Perhaps the most dramatic portrayal of a challenge coin occurred in the series finale of the CBS series “JAG.” The show’s two main characters flip a coin to determine which of them will have to resign his or her military commission when they marry. The show ends on a freeze frame of the flipped coin still in the air, the characters’ fate unknown.

Navy-themed shows such as “JAG” have perhaps used custom military challenge coins the most. Two spinoffs from it, “NCIS” and “NCIS: Los Angeles” have used coins as an integral part of popular episodes. In one “NCIS” episode for example, Special Agent Tony DiNozzo receives a coin from the Secretary of the Navy. DiNozzo, in turn, explains the meaning of the coins to another agent, explaining that those from higher ranking officers are most valued. Therefore, with the SecNav challenge coin, he will “never have to buy drinks again.”

Movies have used custom challenge coins as well. In the Tina Fey film “Whiskey Tango Foxtrot,” Fey’s character was offered a coin by a Marine Commander. In the independent film “Range 15,” one character gains access to a facility by using challenge coins.

It’s a simple fact. Custom military challenge coins have won greater recognition from the civilian community. More people today are aware of them than ever before. That’s likely to increase even more in the future, as custom coins of all kinds become ever more popular.