The Florida Veterans Hall of Fame was established by the State of Florida in 2013 to recognize and honor those military veterans who have contributed significantly to the state. Challenge coins are a great way to acknowledge and celebrate military veterans for their sacrifices.

A Special Design For A Special Veteran

We recently had the honor of working with the Florida Veterans Hall of Fame to create a unique challenge coin commemorating 2019 inductee Sergeant First Class Juan Santiago. The design is a showcase of SFC Santiago’s career and his achievements. This particular coin features a simple design with some unique features that are meaningful and unique to the recipient.

Mr. Santiago is a U.S. Army combat veteran of the Vietnam War. During his 22 years of service, he earned eight Overseas Service bars, with tours in ‎Vietnam. He works closely with Army recruiters from Brevard and Osceola Counties, making regular trips to celebrate the graduation of new soldiers he helped recruit. SFC Santiago is also the recipient of two Purple Hearts. 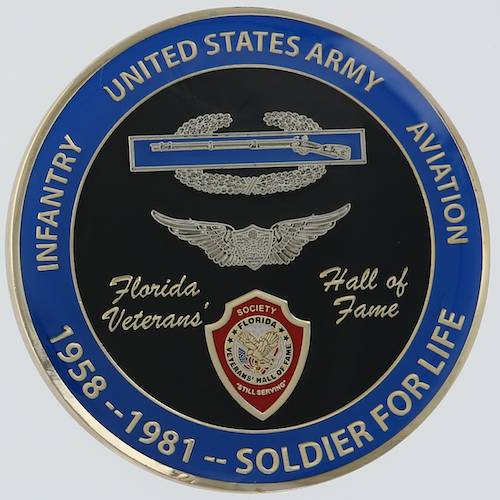 The front of the coin features a straightforward approach with a black center and a blue ring around the border. This provides a nice contrast that keeps the focus on the center of the coin. The blue ring around the perimeter includes the military branch, SFC Santiago’s specialized training, and the years served. The text “Soldier For Life” is also found on the border, incorporating pride and honor. The black space in the center of the coin features a set of wings in tribute to the soldier’s aviation career, while the rifle above it is a nod to his time as an infantryman. The coin also features “Florida Veterans Hall of Fame” and a badge that represents it. 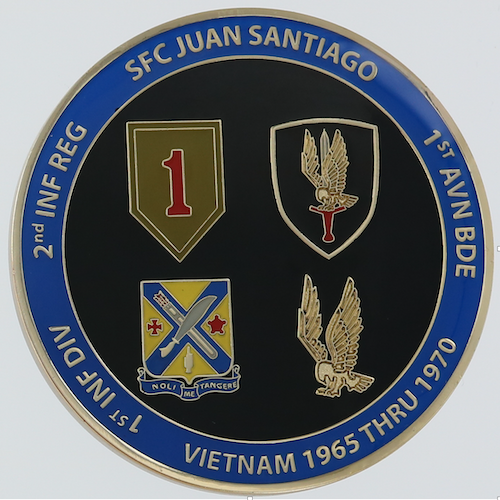 The rear of the coin keeps the same blue and black format but with other details. The blue border includes SFC Santiago’s name at the top, flanked by the units he served with. The bottom of the border area consists of his years of combat service. The black center space incorporates four symbols and insignia that denote the units included around the black border.

This challenge coin is a beautiful example of a thoughtfully designed coin. The contrasting colors keep the focus on the coin’s design, while the elements are meaningful and unique to the soldier. Challenge coins tell a story, and this particular design looks into every detail regarding SFC Santiago’s career.