Challenge coins have evolved from a military tradition to become popular for police and fire departments, government organizations, and even businesses. They are valuable tools that acknowledge achievements, accomplishments, and milestones.

Custom coins are memorable keepsakes designed with a purpose. Each coin boasts unique details that make it special to the recipient. Government organizations such as the Secret Service have their own unique challenge coins and traditions. The U.S. Secret Service has a long history, with a mission of protection and investigation to ensure the security of our country.

We recently worked with the Baltimore field office of the United States Secret Service to produce a particular challenge coin honoring their branch. The design blends Baltimore's history and local landmarks to create a remarkable design.

The United States Secret Service as we know it began in 1865 after the recommendation of President Abraham Lincoln. The Secret Service began as a bureau of the Treasury Department to combat counterfeit currency after the Civil War.

Following the assassination of President William McKinley in 1901, Congress informally requested the Secret Service provide presidential protection, and in 1902 the organization did just that. Later legislative actions codified and expanded that role. The agency was the country's first domestic intelligence and counterintelligence agency, though the Federal Bureau of Investigation later took over those responsibilities upon its creation.

Today agents work in field offices to gather intelligence, assist in tactical operations, and investigate electronic and financial crimes. Protection of the nation's highest elected leaders and other government officials is one of the agency's main objectives.

Custom challenge coins are designed with meaning. They tell a story, represent membership, and honor the past. This particular challenge coin for the Secret Service's Baltimore field office is simple in shape but filled with outstanding attention to detail.

The coin features a standard round shape and a similar composition on the front and back, though the details are different. Thanks to its clean layout and classic approach, the imagery, logos, and text pop. The use of color is subtle, and it makes each small element stand out from the antique base. The coin is an excellent example of a timeless design and outstanding use of 3D imagery. The details of each image are thoughtfully placed and stand out. A well-balanced design makes for a memorable coin.

The front of the coin is a dedication to Baltimore's past. The coin's center features a 3D image that adds texture to the coin. The image features an iconic view of the city's Inner Harbor and the skyline. A submarine and a cutter ship pay homage to the city's past, while a small crab honors its tie to the sea and love for seafood. The details of the image are incredible, from the water's wake to the architecture of the buildings behind it. A black ring borders the imagery with text that reads "United States Secret Service" along the top and "Baltimore Field Office" on the bottom. A representation of the Baltimore city flag and the Maryland state flag finish off the front of the coin. 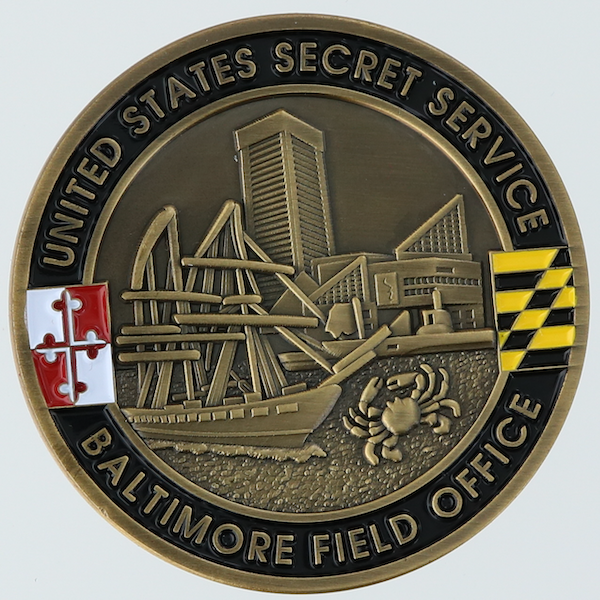 The coin's reverse side is similar in layout to the front, though the key details are different. The design includes an iconic image representing the bombardment of Fort McHenry, which inspired the United States national anthem, "The Star-Spangled Banner." The fort's unique shape is detailed, with vividly clear ships and explosions. The legendary scene is an homage to the city and its place in United States history. A Secret Service badge is located over the top of the image, honoring the agency's past. Encircling the 3D details is a border that includes a representation of the American flag.  The top portion of the border is blue, while the bottom is red and white. Text across the top reads "The Bombs Bursting In Air" in the same antique gold as the coin's base. 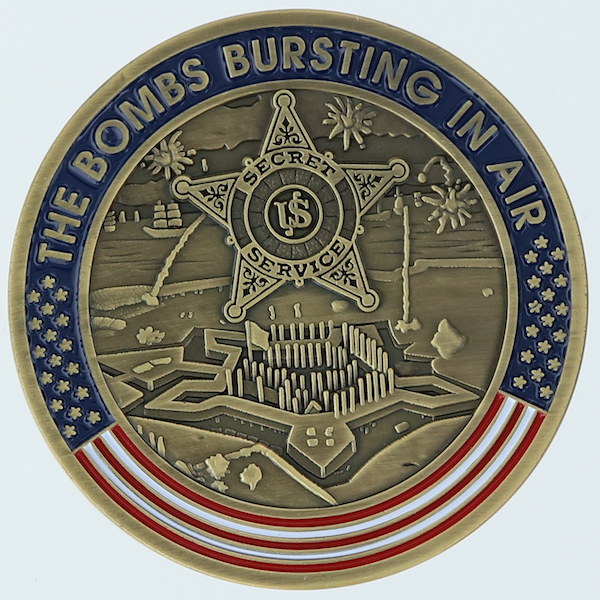 This remarkable challenge coin commemorates the dedication, work, and duties of the Secret Service while honoring the Baltimore field office. The coin includes rich details that have meaning and celebrate the city’s past. The design also honors the Secret Service’s mission of providing protection and conducting investigations. At ChallengeCoins4Less.com, we take pride in creating custom challenge coins that honor excellence and loyalty.