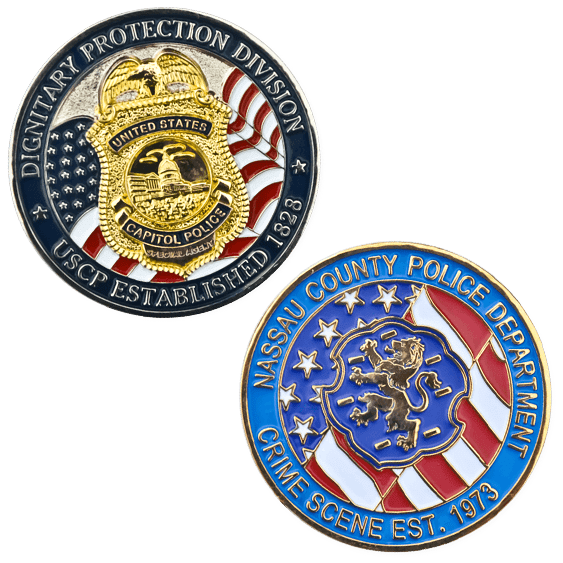 Police Challenge Coins To Honor Our Men And Women In Blue.

We honor the commitment and sacrifice that police officers make every day on the job, and our custom police challenge coins are an ideal way to recognize that noble dedication. Like the challenge coins carried by military members for over a century, police coins have become extremely popular over the past few decades. Do you have a pre-existing design you want to have remade? Not a problem! Have a brand new idea for a coin you want to be minted? We can help! Click below to get started.

There is no exact timeline recorded regarding the origin of law enforcement challenge coins. It is assumed that discharged members of the military who had received challenge coins began joining police forces around the country, sparking interest from other officers on their shift. The same tenets and values surrounding the original challenge coin tradition struck true with law enforcement, and soon departments began designing and awarding their own coins. This new tradition within the police community has grown exponentially over the years, with nearly every department across the US beginning to mint their own lines of challenge coins.

What’s the difference between police coins and regular challenge coins?

Truly, the only difference is in the content of the coin. Police coins are designed and manufactured the same way as traditional military coins, so you can rest assured you’re still receiving the best quality product people have been investing in for a century. Most police coins include some variation on common iconography within the profession, such as a badge, the thin blue line flag, or a bust of St. Michael, the patron saint of law enforcement. Many of these designs employ 3D molding to replicate these symbols in detail and make them pop off the face of the coin, creating a stunning, tactile illusion that leaves everyone in awe.

They’re also used for a variety of different reasons. Sure, police coins are often awarded for bravery or as a token of appreciation for years of service on the force. More recently, we’ve seen a surge of coins being made as memorial trinkets for fallen officers or to show appreciation for those who have gone above and beyond the call of duty, putting in overtime to help protect our communities in these restless times. We’ve even helped departments make special variants of their coins to give out as community outreach or to use for fundraisers. No matter the use, custom coins are here to stay in law enforcement.

Where can I get custom police coins?

You’re already in the right place! We’ve been helping customers design and manufacture custom police coins for fifteen years. Our team has assisted local chiefs, everyday officers, and even our country’s top law enforcement officials in minting the perfect coin for their department. Whether you’ve got an elaborate design you want to flourish or just the first inkling of an idea, let our expertise be your guide to creating the perfect police coins for your precinct.